Where the trails meet

Come visit Elroy for a day, week or forever. Nestled in Southwestern Wisconsin, it is convenient to Wisconsin Dells, LaCrosse and many area state parks. There are campgrounds, bed and breakfasts, sports shops, restaurants, grocery stores, gas stations, lumber, hardware and of course bicycle shops. There is a public library, museum and many specialty shops. While in Elroy you may want to ride across the Sesqicentennial pedestrian covered bridge. This is the only open lattice truss town bridge in the State. Elroy is also the birthplace and home of former Governor Tommy Thompsonwho was also the former Secretary of Health and Human Services under President George W. Bush. 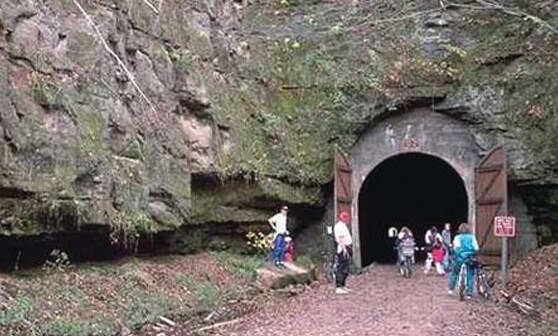 “Where the trails meet” is very appropriate for Elroy as three great bicycle trails can be accessed from one location – the Juneau County Omaha Trail, the 400 State Trail and the granddaddy of them all, the Elroy-Sparta State Trail. Elroy is just a short drive from Wildcat Mountain State Park, Mill Bluff State Park, Devils Lake State Park and Castle Rock Lake. In season fishing, hunting, snowmobiling, cross country skiing, canoeing and many other outdoor activities are available.

The “400” State Trail, the Elroy-Sparta State Trail and the Juneau County Omaha Trail are the three bicycle trails that meet in Elroy. They are all built on discontinued rail lines that once served the area, and are also used as snowmobile trails in the winter. The Elroy-Sparta trail was the first official “rails to trails” bicycle trail in the nation. The Elroy-Sparta trail and the “400” trail join at the Elroy Commons, and the Omaha trail is connected by way of the new covered bridge. The Elroy Commons, built in 1991, is a lovely downtown park providing a trail shop, information center, restrooms with shower facilities, pay phone, parking, bike rentals, picnic areas and a tot lot.

Schultz City Park, one half mile south of the Commons, has facilities for tent camping, R.V. electrical hookups, swimming pool, volleyball courts, tennis courts, ball diamond and a new children’s playground. Elroy is located on State Highways 71, 80 & 82 just 60 miles from LaCrosse and 75 miles from Madison. It is only 12 miles from Interstate 90-94.