Sparta is known as the Bicycling Capital of America. Located in the center of 101 miles of state trails, Sparta is THE best place to stay when you ride the world-famous Elroy-Sparta trail. With three rock tunnels, the Trail is known as a must for anyone on two wheels! Sparta offers the vacationer so much to do and see that 1-day just isn’t enough! The Elroy-Sparta State Bike Trail is the property of the State of Wisconsin and is part of its State Trails System. The La Crosse River State Trail was developed from the abandoned Chicago Northwestern Railroad between Sparta and La Crosse. 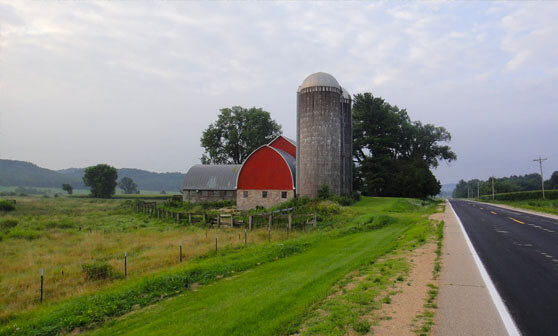 One of the unique features of the La Crosse River Trail is that it runs parallel to a Canadian Pacific railroad main line at different locations for several miles. This provides rail fans, kids, and kids at heart an opportunity to experience up close but at a safe distance, the awesome size and power of these monsters of transportation. Be sure to wave at the conductor as he may give you a friendly toot of his horn to say hello. Bring your camera!

The Elroy-Sparta State Bike Trail is considered to be the first “rails to trails” hiking/biking trail in America! Built from an abandoned Chicago Northwestern main line, the trail features three amazing rock tunnels and dozens of old stone bridges. These tunnels were cut through the rolling hills of Wisconsin in the late 1800’s. Tunnel #3, which is 3/4 of a mile long, is the longest bike trail tunnel in America! Only about a 9 mile bike ride from Sparta, it’s an experience no one should miss! (The trail has a very slight grade of less than 3% — not making it difficult to ride to the tunnel, but making it much easier to ride coming back from the tunnel to Sparta!)

Bike over 18 wheelers steaming down the Interstate at 70 mph! The Elroy Sparta Trail also boasts the only over the Interstate bike bridge in the state, just 1 mile from Sparta over Interstate 90! Needless to say, the Elroy-Sparta trail is 32 miles long with 3 tunnels and is considered to be the “Grand-Daddy” of all bike trails.

Turn your cell phones off and leave the day planner at home! Plan a Sparta vacation that will truly replenish, refresh and rejuvenate your senses! Spend a long weekend , or come during the week and have the trails, shops and attractions all to yourself. You’ll find it all in the Sparta area.