Merrimac is a village in Sauk County, Wisconsin, located on the Wisconsin River. A growing community, located in one of the most scenic parts of Wisconsin, today Merrimac is called home by a mixture of both full and part time residents. Lake Wisconsin is a popular tourist destination for boating, fishing, camping, hunting and all family adventures. The area has campgrounds, resorts, motels, taverns and fine dining to entice almost any vacationer. In 2003 the Memorial Park Project was completed, with new playground equipment, picnic tables, and a pavilion building. 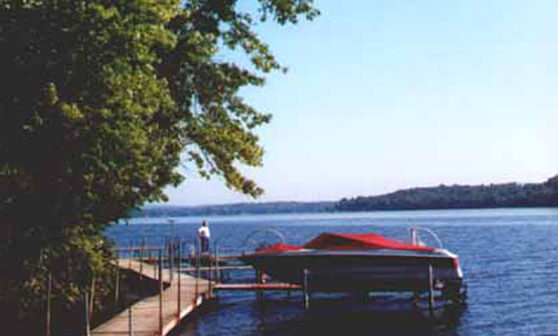 The Merrimac Ferry, which crosses the Wisconsin River between Sauk and Columbia counties, is Wisconsin’s only free ferry. It shuttles State Highway 113 traffic between Okee on the east bank and Merrimac on the west. Ferry service has been provided in this area for more than a century. In 1844, four years before Wisconsin became a state, Chester Mattson, the second settler on the site of the village of Merrimac, obtained charters to provide ferry service at this location. The ferry was operated long before the development of a regular roadway.

Mattson charged either 35 cents or $1 to ferry a team and wagon across the river, but whatever the fare, the ferryman earned it for his muscles provided a good share of the ferry’s power until a gasoline engine was added around the turn of the century. Another private investor, W.P. Flanders, took over the service in 1849 for the sum of $700, and for many years it continued as a private operation. The original “Colsac” (a phonetic combination of the two names, Columbia and Sauk counties) was built in 1924 in Dubuque, Iowa. It was operated as a toll ferry by these counties until 1933, when it was acquired by the old State Highway Commission. It has operated as a free ferry since Columbia and Sauk counties turned it over to the state.

Parfrey’s Glen is located about 4 miles east of Devil’s Lake State Park and is administered by the park. Norman Carter Fassett, while chairman of the Natural Areas Committee from 1945 to 1950, selected Parfrey’s Glen as the first state Natural area in Wisconsin. At it’s uppermost part, the glen reaches a depth of nearly 100 feet. and embraces a mountain-type stream flowing through it’s floor. The Glen’s Walls are sandstone embedded with pebbles and boulders of quartzite. This quartzite is conglomerate, sometimes referred to as a “plum pudding” stone. The sandstone layers represent ancient sandy beach. Because the Glen contains many unusual and rare flora, visitors must stay on the trail from the lower parking area to the top of the glen and retrace their steps back. The Path is about 0.8 miles long.